When it comes to fears, we all have them. Plus the voice of fear will speak first and loudest, it’s our brains way of keeping us safe. But most of the time we need to manage that flight, fight or freeze syndrome to the point that fear knows it’s o.k to take a back seat, because you’ve got this.

Here is a blog on the reasons for and against facing fear, including my own story of same.

5 reasons why not to face your fears:

I will disclose my top 5 reasons why facing your fear is, in fact life giving to self later-on. But first let me explain one occasion when I was the biggest scaredy pants born to man and how I overcame my own fear and then, what happened next.

My job is to help you discover the very best version of yourself possible. It is also my passion. I hold the romantic belief that anything’s possible, because it is. The reason why, is because we are human. Being human means that we have so much undiscovered ability and potential within. In fact, if we knew what we were capable of, it would blow our minds. But, for now, I advise a good approach to change is one step at a time, or bite size chunks.

Another reason is because the idea itself brings hope and wonder. Hope and wonder open the door to what could be.

So, onto my story about a time when I faced my own fear, the reasons why and what happened next.

I have always done my best to practice what I preach. The approaches I take in my coaching practice are reflective of what has worked for me in the past. People book in with me for help to change their lives, especially when they find themselves stuck and don’t know how to move forward. It’s not unusual to find myself listening to their fears at such times. In fact, fears and phobias score highest on the list when it comes to why people resist change. I combine hypnotherapy, talk therapy and a massive load of coaching skills in my approach to same.

Last year, a lady sat in my practice explaining how she had become hostage to fear in her own life. She was terrified of enclosed places and heights. My client admitted a need to control pretty much every waking moment of her days. She loved to travel with her beautiful family. But had become so afraid of flying, the idea of a holiday was not even discussed anymore at home. She was also terrified of lifts and refused point-blank to step inside one, discreetly taking the stairs anywhere she went.

I designed a four-session program to help set her free, not really knowing how much progress we were going to make. But 100% confident if she continued with that willing spirit, we would be successful.

At the end of the first session, I set her the task of taking a lift between now and the next time we meet. The distinct change of tone in her complexion told me all blood had suddenly drained from every part of her anatomy to keep her heart going. But she nodded, attempting to convince me she was going to comply.

You see I could empathize with my clients’ blood drain moment. At the time, I had a trip to Euro Disney planned with Brian and the girls. Despite my girls pleading with me to brave roller coasters in the past, I always refused, un-apologetically. Because the very thoughts of same caused my life to flash before my eyes.

Here’s the history lesson of how the seed was sewn. At the age of eleven I went to Funderland in Dublin with my mum, dad and older sister. No sooner had we entered the doors to Funderland, both Mum and my sister’s eyes popped out of their heads and off they bounced onto a ride called ‘The Spider’. The ear to ear smile on their faces seemed to have a mind of its own, no amount of Botox could have done a better job holding those smiles in place. Well that was enough to convince me, and I followed suit.

Well holy good God in heaven, off that ride I thought I would never get. The cars lifted high in the air. Then weaved in and out missing each other by millimeters, at speed that was unheard of in the book of my dad’s driving habits. I was convinced I was going to die.

And so, my fear of heights and speed was born and was to live a long and happy life of sheer control.

Fast forward time and I have my own kids, who share the same thrill that inserts an invisible coat hanger between their gums each time we are in Disneyland. While me, I stand on the side lines, for hours on end, going from one ride to the other, because I am afraid.

I’m one of those moms that hammer home to my kids the message that says:

‘Fear is there to be faced – go and discover who you can be, don’t let fear hold you back. No matter what it is, go for your dreams’ girls. All you need is a cocktail of passion, focus, hard work and a little luck and you’ve got this.’

So, there I was, face to face with the truth and conflict. I told myself I was a person who walks her talk and works with integrity. While being untrue to both my client and my girls.

But seriously, the whole notion of facing my fear of heights and speed was next to impossible. The fear was 33 years old, it was monstrous, crippling! The thoughts of facing it caused my whole body to completely shut down, thinking it was literally going to die – no exaggeration!

But I had just waved my client off – expecting her to do the same.

Time for an evaluation. I sat down and had one of those long home truth sessions with myself. An appraisal if you like, asking a couple of powerful questions.

“Is this who you want to be?

Are you proud of yourself?

Where is your integrity girl?

It’s either fear or truth, Hilary. Which one do you choose?”

I thought about who I was, and the brave moves I had made in the past. Especially the ones where I was sure I was going to die from dread of what people would think or say. Namely, releasing my book, Saoirse last year. Giving talks where I thought my nerves would cause me to spontaneously combust. I called to mind the talks that were met with loud applause and then the ones that were utterly disastrous. In doing so, I realized, no matter what the outcome or how much fear gripped me, I did not die – not once. Despite the certainty.

As I had hoped, my home truth chat with self was effective. Then, the happy ever after romantic in me finally got her chance to pipe up. She was that voice of inspiration. The one that looks forward. She reminded me that anything is possible because I am human. The monster tried with everything it had to close the door hope and wonder opened, but I held on.

To get to the point, I choose truth.

Was it easy? Not at first.

Did I fear I was going to die? You bet I did, but prayer helped!

How did I do it? I kept my focus on the prize. Showing my kids that their mom walks her talk, fears were there to be faced and by God (and I mean that literally!) this mom faces hers. The other prize was that I could step into my Coaching Practice, knowing that I am the professional I pride myself in being.

Yes, all of the above reasons why not to face this fear screamed through my brain with every instant. I knew I was under threat. But each time, I kept my focus on the reward. Again and again and again. 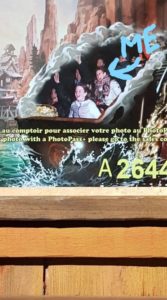 They say words are powerful, but in this instance, I think the picture says it all. This is what I look like when facing my fear. I’m still not sure if my family are laughing with me, at me or just enjoying the ride. But seriously, despite how it looks, they were the mountain of support that got me on and off that roller coaster. And I would do so again in a heartbeat, it was both terrifying and exhilarating!

You see facing your fear does not mean that you wait for the fear to go away before you are ready. That kind of defeats the purpose of having anything to face!

Instead, you accept the fear is there, build yourself up, prepare your mind and…

KEEP YOUR FOCUS ON THE PRIZE.

Now, for my top five reasons for facing your fears:

Finally, I will leave you with two questions:

What would that legacy be?

As for my beautiful client. Shortly after our third session I received an email. She had just taken her first lift in many years. These days she hops in and out of lifts without a second thought. During her final session she spoke of her excitement looking forward to booking a long-haul flight to somewhere stunning this summer with her equally beautiful family. I am so proud of her! (and grateful too).

Hilary Connor is an Author, Professional Well Being Coach and a Hypnotherapist.

Her coaching style is very much based in neuroscience. She primarily looks at human behavior and the thoughts behind it to help clients literally rebuild your brain to align your reality with the life you want!

She has run her wellness practice in Wexford, Ireland for over twenty years and applies her blend of professional modalities to help build out success in a natural, highly effective and scientifically proven way.

In short, she works with people to help them breakthrough barriers, realize their potential and transform their lives.